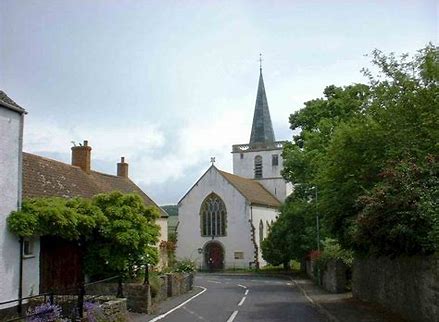 The Church of St Andrew dates from the early 12th century and has been designated as a Grade I listed building.

The church of St Andrew, was built by William de Falaise, as a Benedictine priory church, around 1117 though it is believed to incorporate earlier features.

The church was enlarged around 1180 when the apses were demolished and the chancel extended. The priory was dissolved around 1440, and it became a parish church. It was further altered in the 15th century, the nave was extensively restored 1824 by Richard Carver and the chancel rebuilt between 1863 and 1865 by John Norton  The interior contains two Norman fonts

At floor level in the south arch is a Sanctuary Ring installed in the 13th century. In Medieval England criminals could find a Place of Refuge in a church for up to forty days and then admit their crime or stand trial. If they admitted their felony they would forfeit their possessions and go into exile. The sanctuary ring in the Church of St Andrew was installed 1243 after a murderer, John de Rechich, was granted sanctuary and then absconded before his trial which meant that the priory was liable for his fine.

The tower holds six bells the oldest of which dates from 1611.

The parish is part of the Quantock Coast Benefuce within the Quantock deanery with the ministry team led by the Rector, Rev. Nicky Morgan.