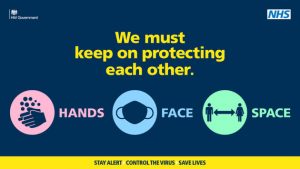 Meeting with others safely

With cooler weather on the horizon, we will no doubt soon be spending more time indoors. So it’s important we all continue to follow government guidance to control the spread of coronavirus (COVID-19).

We all need to remember hands, face and space:

Following these simple steps could make a significant difference in reducing the transmission of coronavirus (COVID-19). Help to protect you and your friends, colleagues and family. 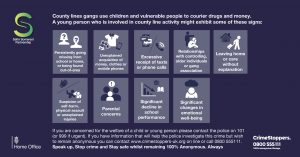 County Lines is a term used to describe gangs and organised criminal networks involved in exporting illegal drugs into one or more importing areas (within the UK), using dedicated mobile phone lines or other form of ‘deal line’. They are likely to exploit children and vulnerable adults to act as runners to move (and store) the drugs and money. They will often use coercion, intimidation, violence (including sexual violence) and weapons.

‘Cuckooing’ is a method commonly associated with County Lines, where non-local offenders – often heroin and crack cocaine dealers – take over the homes of local residents to create bases from which they supply local drugs markets. From cases nationally and locally, it is understood that this method can often involve serious violence, coercion and manipulation, often targeting vulnerable people such as drug users, single mothers and people with learning disabilities.

Children often don’t see themselves as victims or realise they have been groomed to get involved in criminality. So, it’s important that we all play our part to understand County Lines and speak out if we have concerns.

The signs to spot

What to do if you have concerns

The best advice is to trust your instincts. Even if someone isn’t involved in County Lines drug dealing, they may be being exploited in some other way, so it’s always worth speaking out.

If you are a young person who is worried about your involvement, or a friend’s involvement in County Lines, a good option is to speak to an adult you trust and talk to them about your concerns.

Safer Somerset Partnership has launched a county wide County Lines campaign in partnership with Crimestoppers in a bid to stop illegal drug related criminal activity operating in the area.

If you are concerned for the welfare of a child or young person, please contact the police on 101 (or 999 if urgent). If you have information that will help the police investigate this crime but wish to remain anonymous you can contact www.crimestoppers-uk.org online or phone 0800 555111.

Illegal drugs activity is nothing new, but the risk of serious violence, the sophistication of the method and the targeted exploitation of vulnerable members of our communities makes County Lines a priority area of work for the Partnership and for this reason, Safer Somerset Partnership is delighted to present Somerset’s first County Lines Strategy. 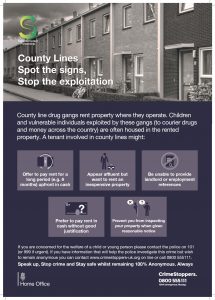 We have been assured that this will now not be carried out until November 2020, on dates to be advised. 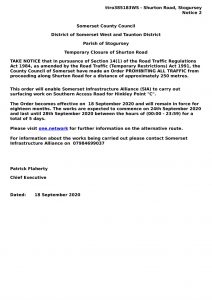 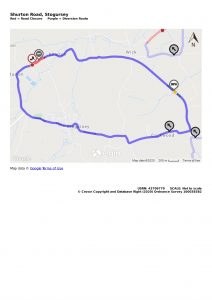 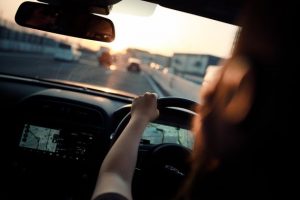 The best travel options are walking and cycling, rather than sitting in an enclosed space with other people, but if you do need to drive or share a lift with people from other households, please take some sensible precautions: 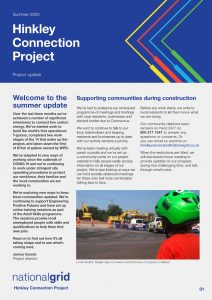 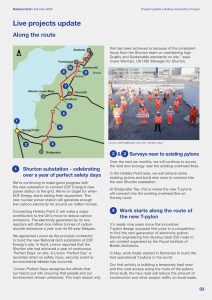 You can download the full document here – HCP summer update 2020

The first visit to Shurton and Stogursey will be on Thursday 13 August:

In order to protect library staff and customers, the Mobile Library service will look very different as it re-launches.
• You won’t be able to browse books on the vehicle
• You can use the ‘order and collect’ service to request library books in advance – the books will be delivered
to you at your normal Mobile Library stop.

Order your library books by:
– contacting Librariesmail@somerset.gov.uk,
– going to the Somerset Libraries website, or
– phoning 0300 123 2224.

• Your Mobile Library driver will have a supply of order forms for you to complete in readiness for the next
mobile Library delivery.

• If easily accessible, the driver may be able to select the books for you from the vehicle.

In time there may be a browsing facility on the vehicle, limited to one customer on the vehicle at any time. This
will mean creating a safe distance queuing system.